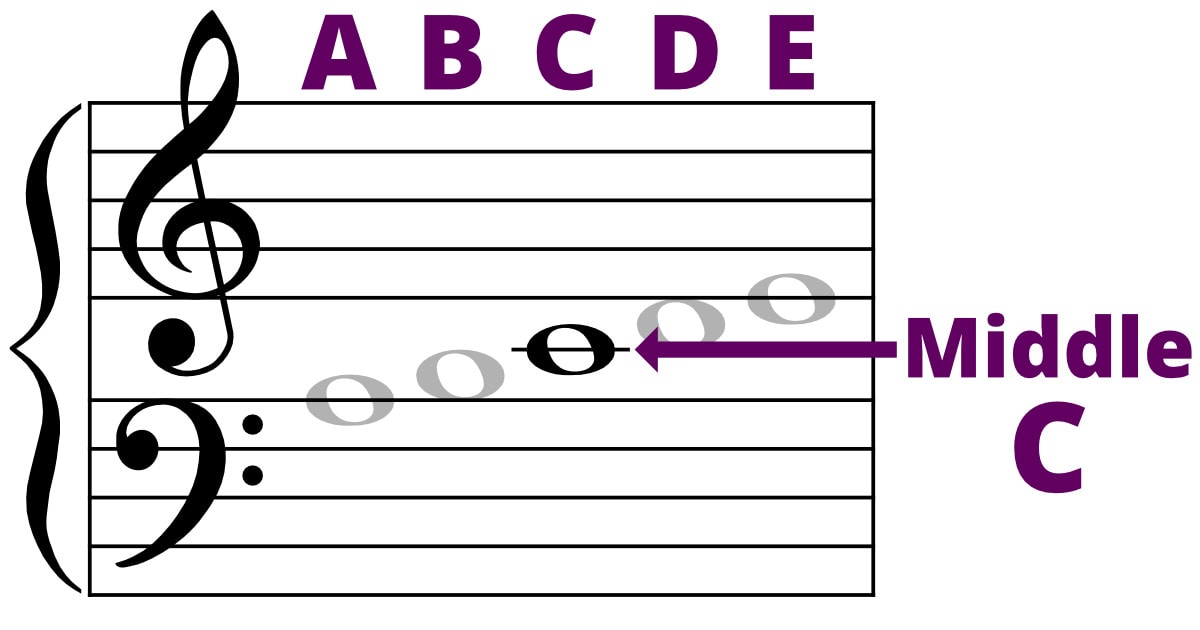 Have you ever wondered why Middle C is called "Middle C"? This note got its unique name based on where it appears in the Grand Staff.

To explain in more detail, let's start with the Music Staff.

What is the Music Staff?

The music staff is a group of lines that musicians use to read music. It is 5 lines stacked horizontally on top of each other, with a space between each line. This gives us a total of 5 lines and 4 spaces.

On the staff, music notes can be placed on a line or in a space. Each line and space represents a note from the musical alphabet (A B C D E F or G). All notes on that line (or space) have the same letter name. As you go up the staff to the next line or space, count forward in the alphabet to the next letter.

Every music staff also has a clef in front of it. Without the clef, the music staff is just a bunch of lines. There's no way to know which note is which.

What are Music Clefs?

A Clef is a symbol that tells you how to read a Music Staff by showing where a certain note is. Once you know where one note is, you can figure out all the other notes on the staff.

Treble Clef shows that G is on line 2.

Treble Clef is sometimes called G clef because it shows where G is. See how it wraps around the second line from the bottom? This line is G.

Bass Clef is sometimes called F clef because it shows where F is. See the two dots above and below the fourth line from the bottom? This line is F. 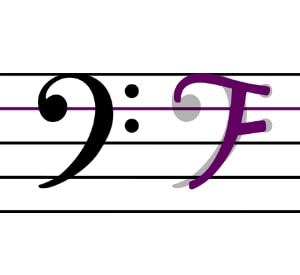 Bass Clef shows that F is on line 4.

Clefs make it easy to read notes on the staff. Once you know where one note is on the staff, all you have to do is count the letters up and down the lines and spaces to name the rest of the notes.

Clefs also let us read notes in different pitch ranges (octaves). The G shown by the Treble Clef isn't just any G, it's the G above Middle C. So the Treble Staff shows notes in the 4th and 5th octaves (higher pitch range). The F shown by the Bass Clef is the F below Middle C, so the Bass Staff shows notes in the 2nd and 3rd octaves (lower pitch range). See my article on Scientific Pitch Notation for more details about these octave ranges.

Clefs make it possible to read a wide range of notes, but sometimes it's still not enough. For notes that are too high or too low to appear within the staff, we use ledger lines.

What are Ledger Lines in Music?

A music staff, with 5 lines and 4 spaces, can only show 9 notes. But the simple brilliance of it is that actually, there are an infinite number of staff lines!

These lines and spaces continue forever up and down the page, showing every note's place on the staff. BUT, because it would be way too complicated to count all those lines in real time, the traditional music staff shows just 5 lines. (The other lines are still technically above and below it, just unseen.) 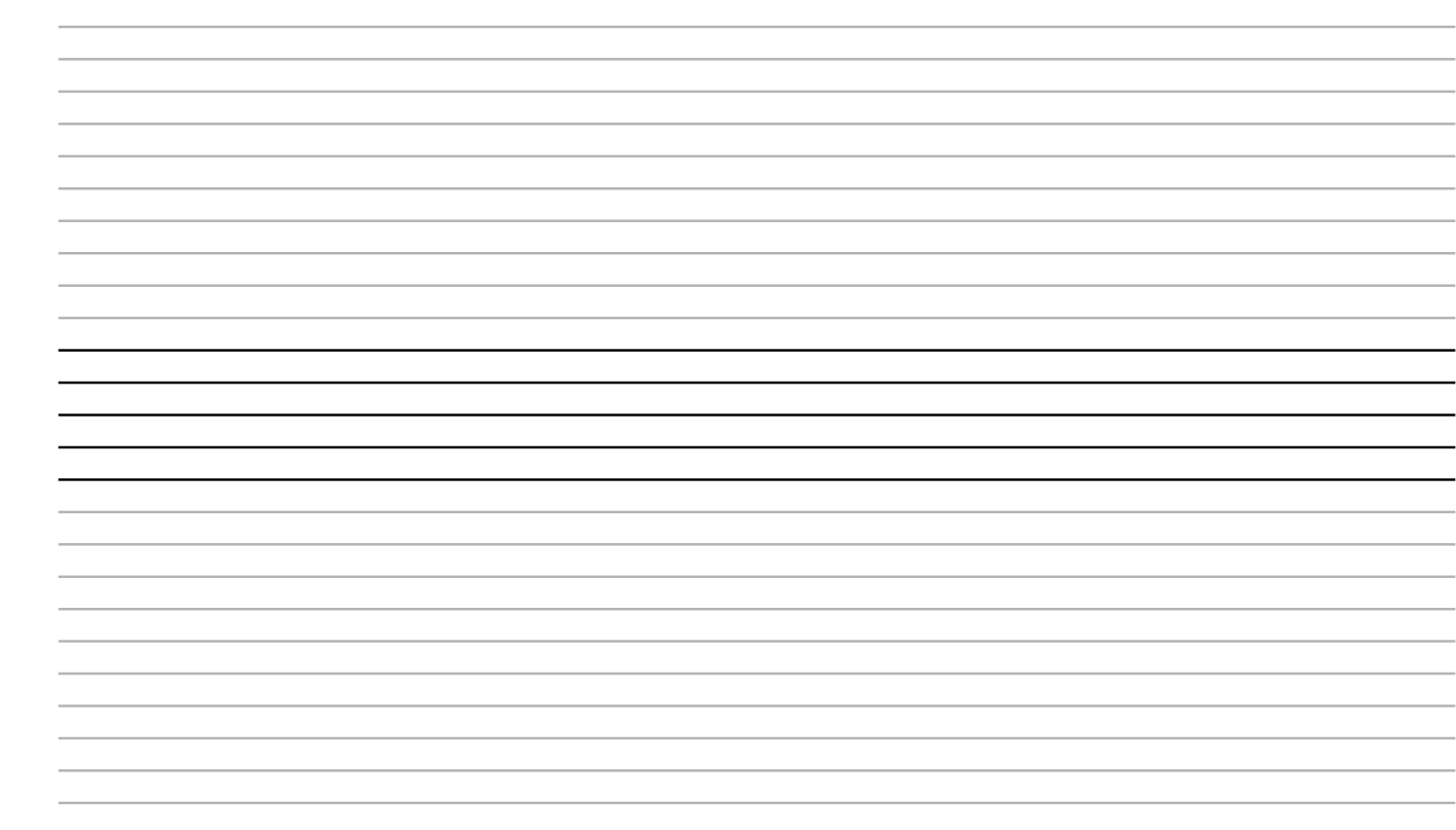 Imagine having to count all these lines to read music... 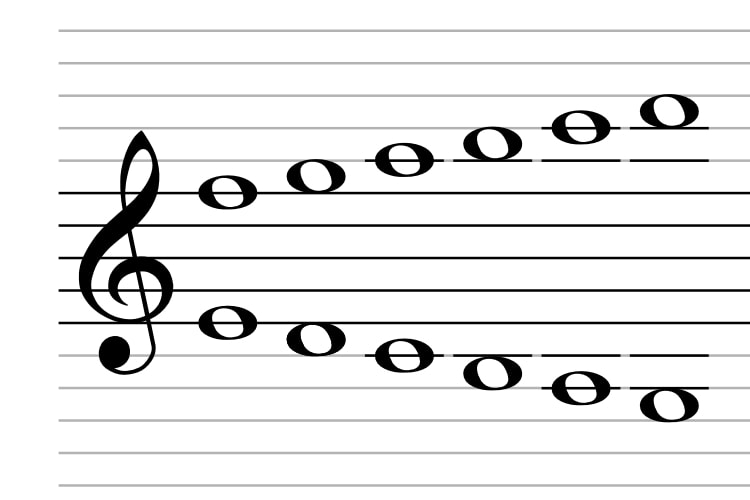 Treble Staff showing the unseen staff lines above and below. (Every note has its place, but it's difficult to keep track of so many lines!) 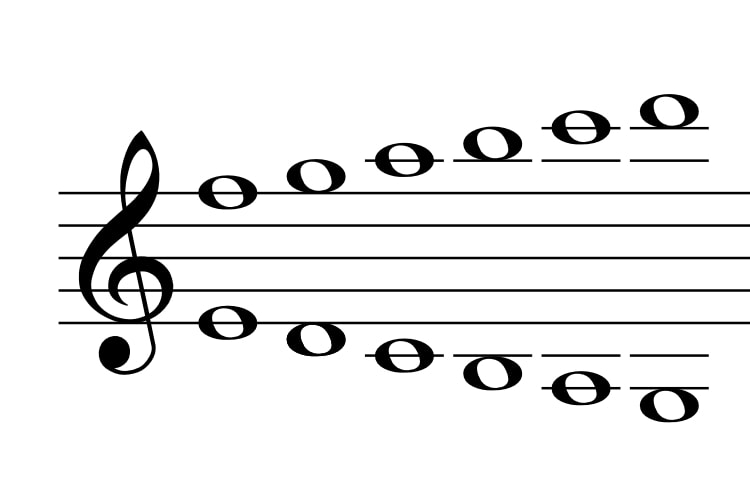 Treble Staff showing ledger lines only for the notes that need them. (Every note has its place, and it's much easier to keep track of the lines.)

Middle C on the Treble Staff

A good example of using a ledger line is the subject of this post: Middle C. While some of the lesser commonly Clefs show middle C on the staff, neither Treble nor Bass Clef shows Middle C on their staff lines. For both of these staves, we have to use a ledger line to show Middle C.

The 1st line (bottom line) of the Treble Staff is the E just above to Middle C. The space below that is D, and Middle C is just below that. Because there are no more visible staff lines here, we draw a ledger line to show that Middle C is on the (invisible) staff line that belongs here. 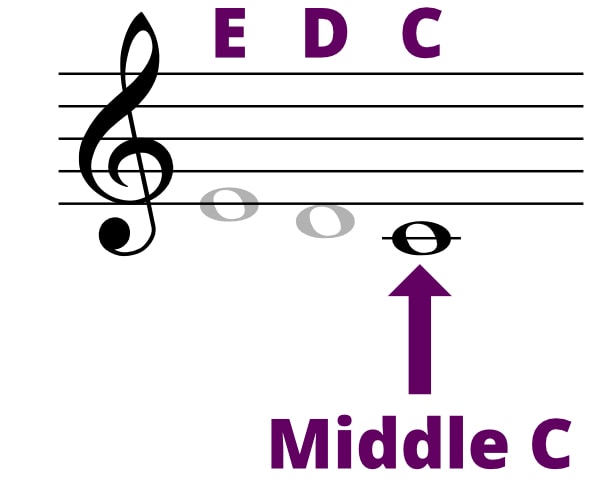 Any Treble notes lower than Middle C also show the Middle C ledger line so that there's no confusion about which note it is. For example, the A below Middle C shows two ledger lines, because it is on the 2nd (invisible) line below the staff.

Ledger lines can extend the music staff as far as necessary to show any note above or below the music staff. Without ledger lines, these notes would just be floating in the open ledger space, and it would be very confusing trying to figure out exactly which note to use. 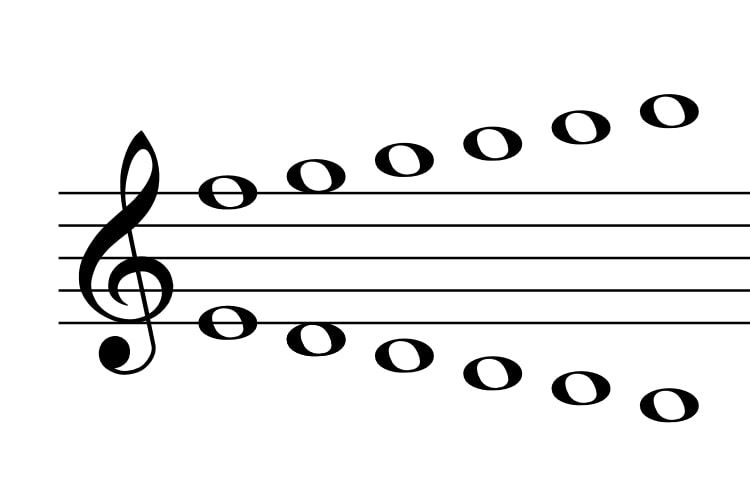 Without ledger lines, it is difficult to tell what some of these notes are supposed to be. 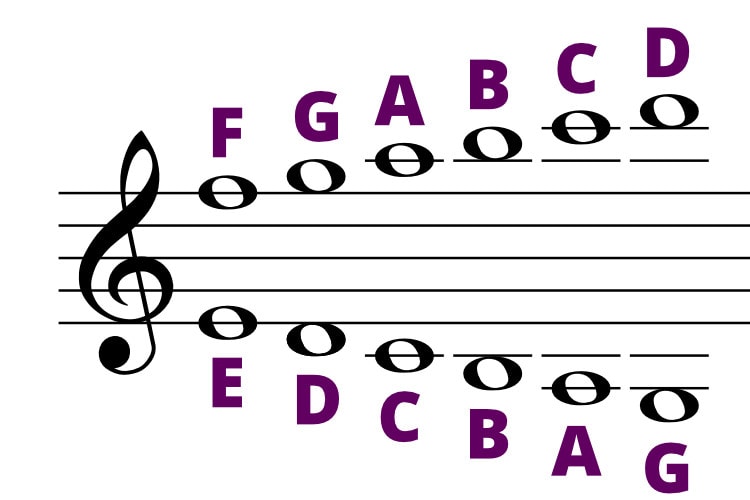 With the Treble Clef and ledger lines, these notes are clear and easy to read.

This brings us back to our original question about why Middle C is called Middle C. This is because Middle C is in the middle of the Grand Staff.

So, what is the Grand Staff?

What is the Grand Staff in Music?

The Grand Staff is two music staves that are stacked on top of each other, and joined on the left side by a brace. Traditionally, the upper group of staff lines are a Treble Staff, and the lower ones are a Bass Staff.

In the Grand Staff, there is a wide empty gap between the Treble Staff and Bass Staff.

This gap helps separate the Treble and Bass staves so that they're easier to read, and it leaves plenty of room to add ledger lines as needed.

However, the true "gap" between the Treble and Bass staves is actually much smaller. It is actually only the size of one staff line...

...And that invisible staff line in the middle of the Grand Staff is Middle C!

As we showed earlier, the bottom line of the Treble Staff is the E just above Middle C. The space below that is D, and Middle C is on the first ledger line below.

The 5th line (top line) of the Bass Staff is the A just below Middle C. The space above that is B, and Middle C is on the first ledger line above. 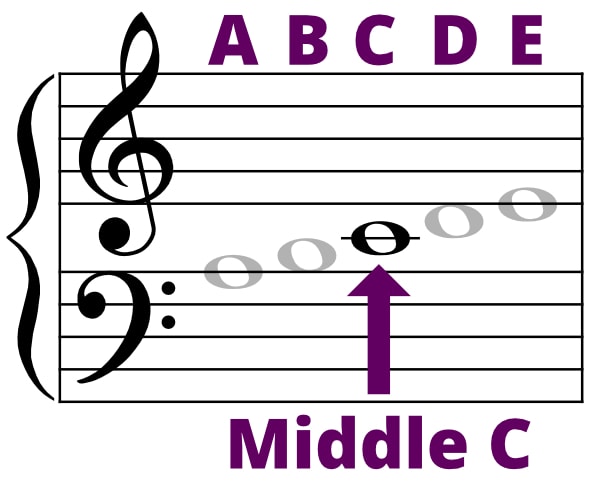