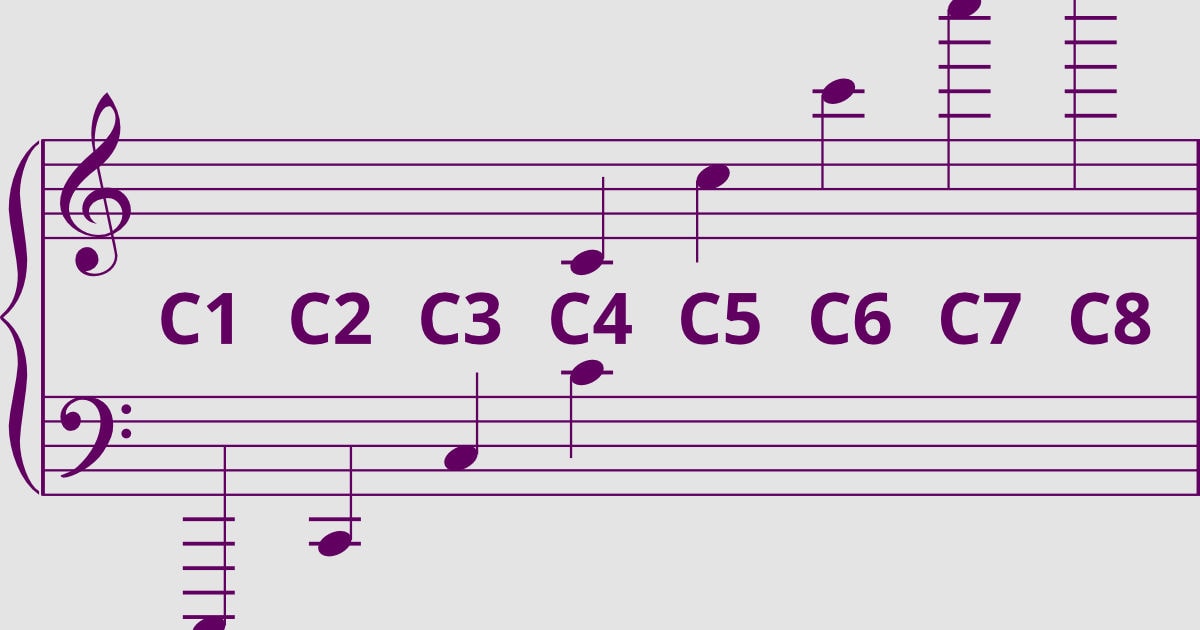 Have you ever heard someone mention the notes C5 or A2 and had no idea what it means? It's actually from the American system for notating pitches, called Scientific Pitch Notation (SPN). This sounds really complicated, but in reality it's really simple! All it takes is a basic knowledge of numbers and letters and applying them to the piano keyboard.

What is Scientific Pitch Notation?

A quick definition: Combine the name of the pitch (letter) with the octave the pitch is in (number). This letter and number combination is the "scientific pitch notation" and indicates a precise pitch. For example, C4 = Middle C on the piano. C4 refers to this exact C, not a lower or higher C.

Let's go into more detail with some background information.

The first part of SPN is the pitch name. This comes from the Musical Alphabet, where each letter represents a specific sound or “pitch”. The Musical Alphabet is the first 7 letters of the Latin alphabet: A, B, C, D, E, F, G (repeated over and over).

As you move from A to B to C and so on, the pitch gets higher. After G, the next higher letter is A, and the pattern repeats.

As the letters repeat, the pitches “repeat”, too. For example, a low A and a high A sound very similar (almost the same!), except that one is lower. All As sound very similar to each other, and the same goes for all Bs, all Cs, etc.

The Musical Alphabet and the Piano Keyboard

The white keys on the piano play the musical alphabet: A, B, C, D, E, F, G (repeating over and over in order).

The lowest white key on the left of the piano keyboard is A. The next white key to the right is B. The next is C, then D, then E, and so on. After G, the next higher white key is A, and the pattern repeats.

As you go up the keyboard, each key produces a higher pitch. In addition, keys with the same letter name sound similar. All the A keys sound very similar to each other, and the same goes for all the Bs, all the Cs, and so on.

Side Note: The black keys of the piano represent sharps and flats and are organized in groups of 2s and 3s so that you can quickly find keys of the same pitch by sight alone. For example, all Cs are immediately left of a 2-black-keys group.

The second part of SPN is the octave number.

Each group of piano keys or pitches from A to the next A is one octave. Same with B to the next B, C to C, D to D, etc. Octave 1 is the first full octave on the piano, octave 2 is the 2nd, and so on. (This is why we are looking at the piano keyboard.)

Due primarily to the major scale in music theory, octaves in SPN start with C. So the first octave begins with the very lowest C key on the piano. As the C in the 1st octave, this key is called C1. The next key is D1, then E1, then F1, G1, A1, and B1.

When you reach the next C key, you’re now playing the 2nd octave, so these are called C2, D2, E2, F2, etc. Continue this pattern until you reach the highest white key (C8).

Side note: Because they are lower than the 1st full octave, the two lowest keys on the piano are called A0 and B0 in Scientific Pitch Notation. These are Octave 0 because they are the lowest range of what human ears can actually perceive as unique pitches.

Yep, that's it! Combine the letter name of any pitch with the octave number the pitch is in, and that is its Scientific Pitch Notation.

Using this system, you can identify any specific pitch with just a letter and a number. You can match or identify any given pitch by counting up the octaves and keys from C1 on the piano.

What About Sharps and Flats?

To label sharps and flats with SPN, just put the flat sign or sharp sign between the letter and the number. Want to sharp that C5? Call it C#5. 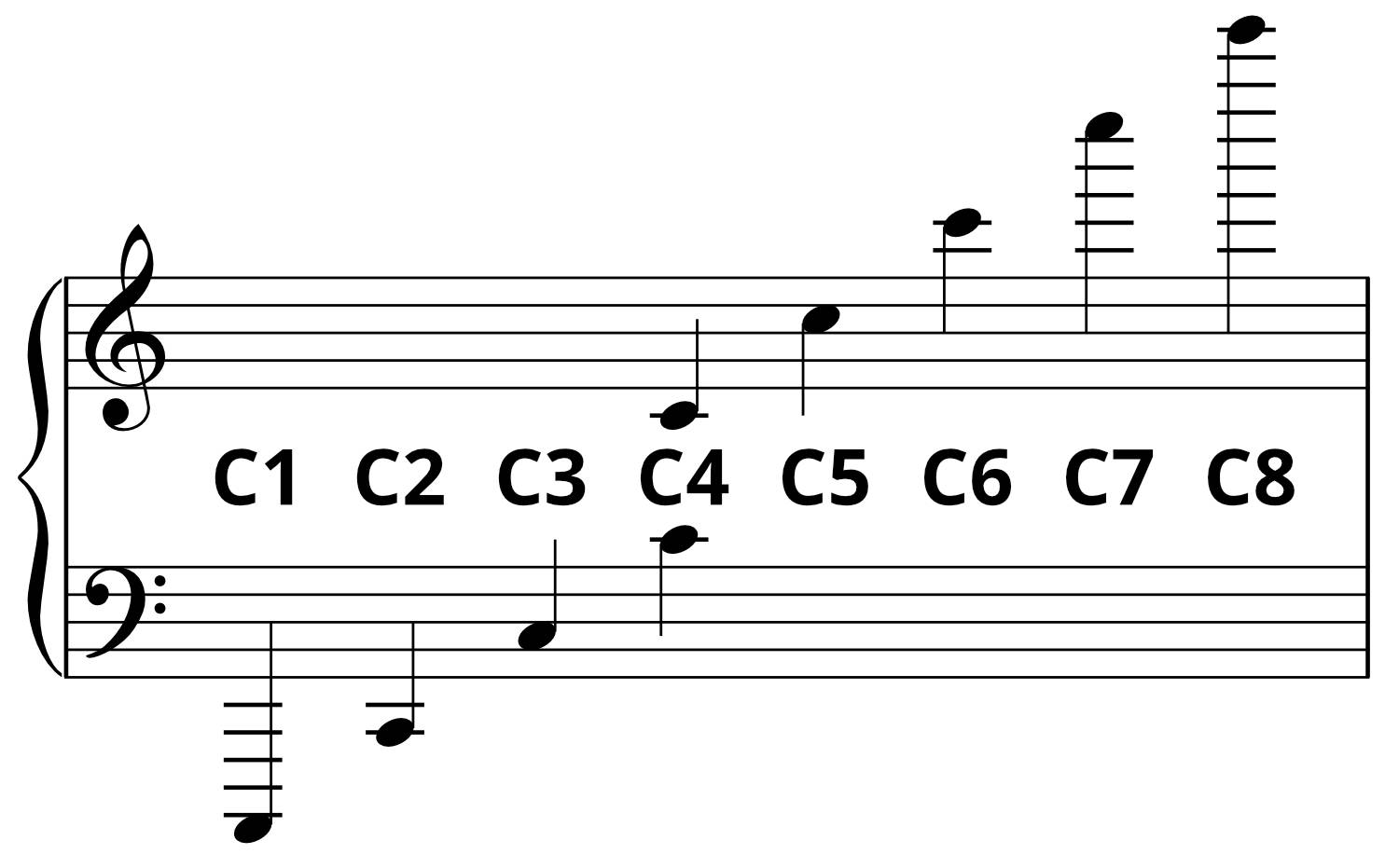 Why Do We Use Scientific Pitch Notation?

Scientific Pitch Notation is used not only with piano but also with singing and many other instruments, so musicians should become familiar with it. A good tip is to memorize that C4 is Middle C (the note in the exact middle of the Grand Staff), so you can refer to that when someone mentions B3 or F7 or another note.

Now, when a voice teacher excitedly tells you their newest student can sing C2, you’ll understand their excitement (not many people can sing so low!). Or when you’re studying various instruments and discover that a clarinet’s range is E3 to C7, you’ll be impressed to realize that its range is nearly 4 octaves!

The Benefit of Scientific Pitch Notation

SPN also makes things far less confusing when musicians are communicating with each other. If someone refers to C5, you know it’s the C in the 5th octave. It’s extremely useful when you’re trying to match or identify both the pitch AND the octave, which musicians have to do all the time.

Ask someone to play you a G and they’ll play whichever G they want — but ask them to play a G2, and they’ll play the exact pitch you wanted to hear. And if they don't know what you mean, now you'll be able to teach them about Scientific Pitch Notation!